However, the construction work began without any discussions between the Department of Defense and the Okinawa Prefectural Government taking place. Also, a dead dugong was found in the waters of the northern part of the mainland of Okinawa. Therefore, we have sent a letter to three members of the U.S. government including the Secretary of Defense to request the U.S. government to retract the relocation plan to Henoko to protect the dugongs.

Notice of Revocation of Approval for Reclamation of Public Waters

On August 31th, 2018,The Okinawa Prefectural Government Submitted Japanese government Notice of Revocation of Approval for Reclamation of Public Waters.

Contents of the Symposium on Henoko-Oura Bay “Okinawa’s Treasure, the World’s Treasure: Let’s pass it on to the future”

The Okinawa Prefectural Government organized a symposium on Henoko-Oura Bay on March 24th, 2018, with a view to raising awareness over the preciousness of Henoko-Oura Bay.

Following the keynote speech, experts from Japan and abroad, as well as those that have long carried out studies on the Oura Bay and/or engaged in its conservation efforts, contributed their expertise to the panel discussions.

Please find below the Summary Report, handouts as well as videos from the Symposium.  Large diffusion is encouraged to protect the beautiful and precious sea area in Henoko-Oura Bay.

★Videos from the Symposium★ (Below are the links to the external website.)

Remarks by the Governor Onaga (in Japanese)

Request for Stakeholder Consultation over the lawsuit on Okinawa Dugongs

On April 16, 2018,With regard to the lawsuit on Okinawa dugongs in the Unites States, the Okinawa Prefectural Government has contacted the Honorable James Mattis, Secretary of Defense of the United States and three respective Commanders of the U.S. Forces in writing as attached, with the aim of requesting stakeholder consultation, an administrative procedure in accordance with the United States National Historical Preservation Act (NHPA).

Request for consultation regarding Okinawa dugongs under the U.S. NHPA（PDF：131KB）

On April 20, 2017, Takeshi Onaga ,the governor of Okinawa Prefecture, sent his opinion letter to eight environmental protection organizations to ask them to reach out to both the U.S. and Japanese governments to abandon the construction of new base in Henoko in Nago City, Okinawa,Japan.

To Director General of IUCN（PDF：62KB）

To Director of Washington D.C Office（PDF：63KB）

To Director General of UNESCO（PDF：59KB）

To Director General of WWF（PDF：60KB）

The governor of Okinawa revoked the reclamation approval for the new U.S. base at Henoko on Oct 13th,2015.（PDF：23KB）

U.S. Military Base in Okinawa

Okinawa Prefectural Government regards the Japan-U.S. alliance as vital. However, we have a concentration of 73.9% of the exclusive use facilities and areas of U.S. Forces in Japan in a land area that is no more than 0.6% of the national land area. Therefore, it is necessary to reduce and consolidate U.S. military bases in Okinawa.

With the realization of land returns of U.S. military bases south of Kadena Air Base, we can anticipate positive economic and employment impacts through effective land use.

Establish the prefecture as a hub of exchange by taking advantage of our geographical location, to bridge people, goods, and information between mainland Japan and other Asian nations. It is our desire to actively promote international contribution and do our part for peace and advancement of the Asia-Pacific region.

Most facilities for U.S. Forces are located in Okinawa Island; taking up to 18.4% of its land area. Land area of Okinawa Island is roughly 1/3 that of Rhode Island, which is the smallest state in the U.S.

Pamphlet:"U.S. Military Base Issues in Okinawa" 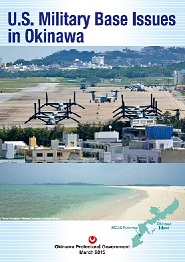